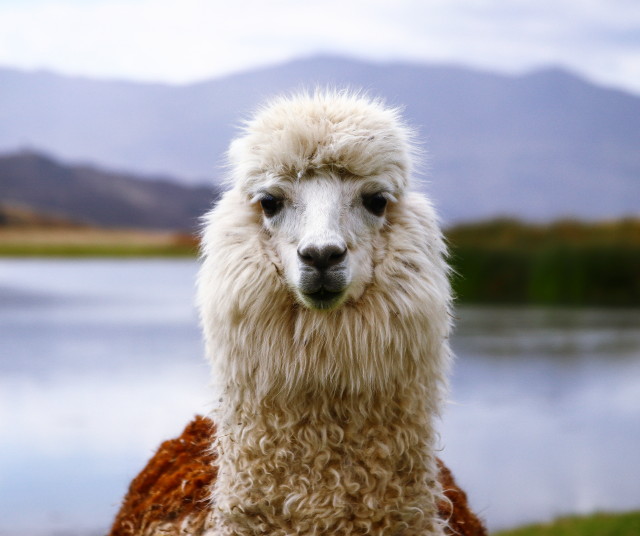 When thinking about the Andes, most of us picture snow-capped mountains, vast green plains, indigenous peoples …and herds of llamas. And yes, these are some of the main characteristics of the mountainous South American region – including the llamas. In fact, American llamas and their close cousins inhabit the immense and frigid plains and slopes along the entire 4,000-mile mountain range. Possessing both beauty and elegance, with their thin necks and slender legs, they are placed in the same family as their more distant relative, the camel – from which they get the name “camelids.”

In South America, four species of these camelids exist, and here we’ll point out some of their features, similarities and differences.

Llamas: The Sacred Camels of the Incas 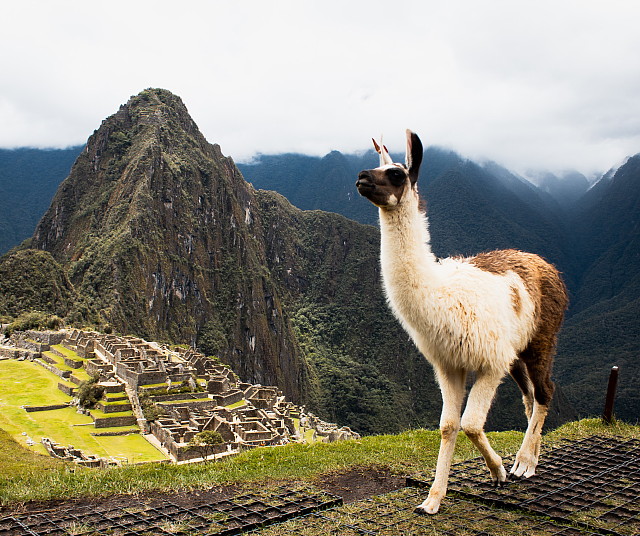 Among the Andean camelids, the llama is the largest. Their most striking feature is that they’re not a natural species, but a “creation” of human beings. Specifically, some 5,000 years ago, the people of the highlands began domesticating guanacos (see below), breeding them to constitute today’s llama. The animal’s geographical distribution is now wide, since it became a trade commodity during the Inca Empire. For the Incas, the llama was a sacred animal, believing that each llama on Earth had its “mirror” in the “Celestial Llama”: a constellation that could be seen from certain sacred places.

Today, llamas are found principally in the Andes of Peru, Bolivia, Chile, Ecuador, and Argentina, where they have traditionally been used as beasts of burden, though they are also still used for their wool and meat. As their wool is thick and strong, it’s highly valued – particularly because it doesn’t have to be chemically treated. 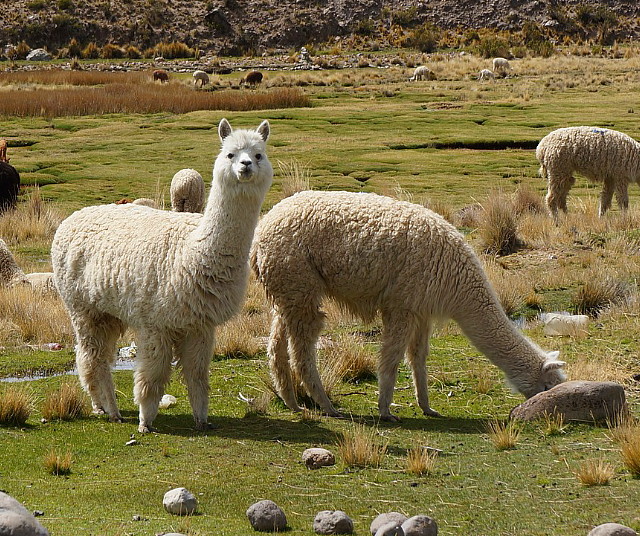 The alpaca is a smaller species, though, like the llama (and camels), it has the habit of spitting as a method of defense. Alpacas differ from llamas, though, in that they are not used as beasts of burden but were domesticated for thousands of years for their highly-valued wool – considered the finest among camelids. Alpaca wool is used to make products as diverse as blankets, ponchos, scarves, vests, and sweaters, while their meat is considered a delicacy by some peoples of Andes. These camelids stand at just around one-meter high and weigh between 50 and 55 kg. They are found mainly in Ecuador, Peru, Bolivia, Chile, and Argentina, although countries such as Australia, the USA, and New Zealand possess small numbers as breeders are making great efforts to increase their populations.

Guanaco: The Antelopes of the South 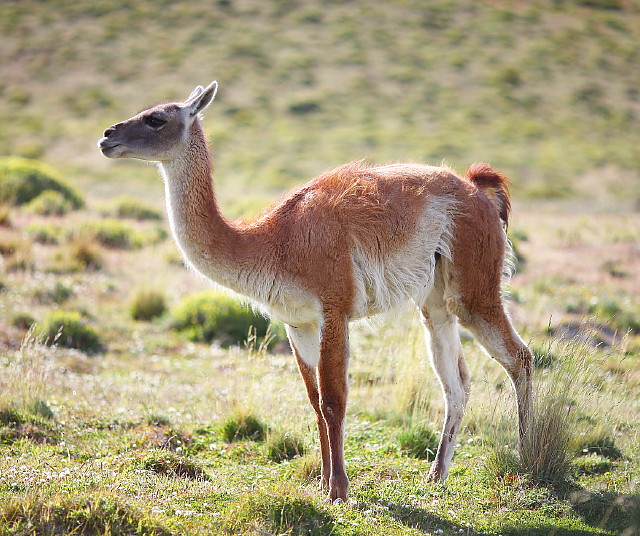 Elegant, possessing fine bones, and a fast runner (reaching up to 64 km per hour), the guanaco is also a threatened species of camelid, even scarcer than llamas. The animal is sociable, especially when young, though later they become more aloof in relation to humans while roaming in large herds in semi-desert areas. They have thick and soft coats that protect them from the cold, which is helpful in that they live mainly in Peru, Chile, Bolivia, and Argentina. Guanacos can weigh up to 140 kg and measure 1.70 m in height. Their coats are of three shades: beige on the upper body, white on their stomach areas and gray on their heads. Their wool and leather are used to make fine and highly valued garments.

Vicuña: The Babies of the Bunch 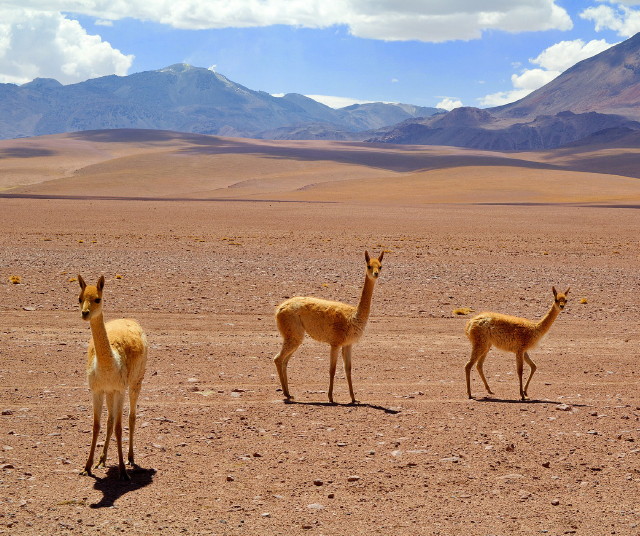 The vicuña, a patriotic symbol of Peru, is a smaller herbivorous camelid. Reaching a length of 80 cm and weighing between 40 and 50 kg. These sedentary animals have long legs and, in a sense, are ecological because the soles of their feet have a kind of pad that prevents them from digging up vegetation; in this way, they contribute less to erosion. They have a very structured and organized social system, with adult males living with a harem of two or three females and their young. The wool of the vicuña is some of the best of its type, since, in the world of haute couture, a square meter can cost up to $3,000. High fashion labels, especially Italian and French companies, use vicuña wool for the production of exclusive clothing; however, due to the intense hunting of these animals since ancient times, vicuna are now in danger of extinction. Like alpacas and llamas, they live mainly in Chile, Argentina, Bolivia, Peru, and Ecuador.

As for similarities, the four share some characteristics: for example, their ability to breed with each other and their sexual dimorphism (which means it’s not easy to distinguish their gender). Also, alpacas, llamas, and vicunas have another common feature: they live in highlands, while guanacos can live at sea level. Also, llamas and alpacas are domesticated species, while the sleeker vicuñas and guanacos are found only in the wild.

No matter how they vary, there is much to discover about these graceful animals. When traveling through the Andes, it’s worth seeing them up close and personal in the rugged landscapes in which they reign.