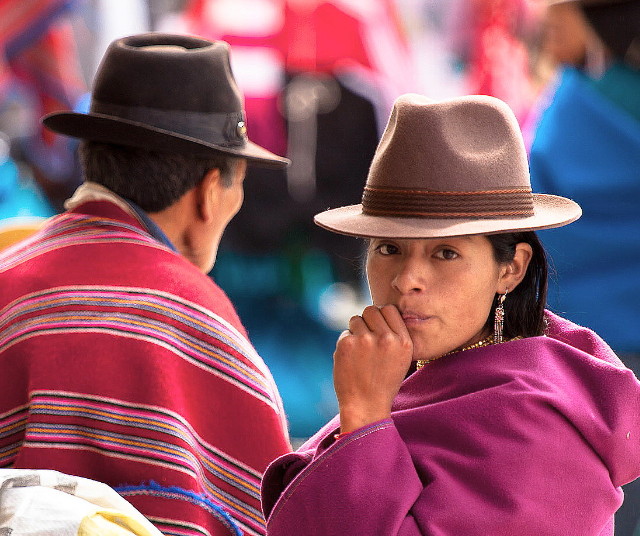 In a small but remarkable region of the Ecuadorian Andes, the area’s local crafts have become famous worldwide. The skill and business acumen of the inhabitants of the province of Imbabura — where about 400,000 people live — have been the basis for the development of this dynamic Ecuadorian region. This is a timeless setting where artisans still rise before the sun to move their looms, turn on old sewing machines, and use chisels, lathes and brushes to cut, shape, and create.

If you travel to Ecuador, don’t overlook this as a privileged natural region, also known as the “Province of Lakes,” where some say the real “Middle of the World” is located. We assure you that you’ll be inspired by the wonderful environment of a region that combines a temperate climate, snow-capped volcanoes, crystal waterfalls, picturesque Andean villages, and an artisanal vein full of contrasts.

Let’s continue on this tour Ecuador’s northern highland province of Imbabura with the eyes of an apprentice anxious to learn the secrets of fiery kilns, carving workshops, century-old adobe houses housing enormous large looms, and modern garment and footwear factories. Here, we share with you a small sample of what is created in Imbabura.

This predominantly indigenous city is located about two hours north of Ecuador’s capital city of Quito. Home to the Kichwa ethnic group, Otavalo is a small town but with a cosmopolitan flair. The village has been declared the “Capital Intercultural Ecuador” due also to the large number of foreigners who visit to experience life in this unique destination. 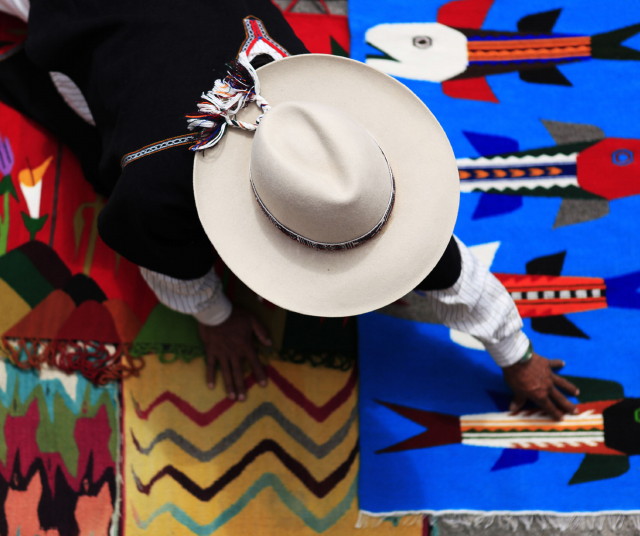 In addition to its diversity, as well as it restaurants, hostels, haciendas converted into beautiful hotels, streets illuminated with lanterns, and clothing stores, Otavalo’s main attraction is undoubtedly its market. Located in the “Plaza de los Ponchos,” this market is one of the largest craft fairs in Latin America, bustling every Saturday with the arrival of hundreds of artisans, vendors and tourists. To experience this Andean bazaar, visitors come from all over the world. Arriving here, travelers spend hours marveling at the handiworks of craftspeople who have learned the skills of their ancestors and teach these to their descendants. Exhibited for sale in this square are their works: ponchos, tapestries, all kinds of wool garments, fine embroidery (most of them made by hand), carved wooden pieces, jewelry, stone sculptures, accessories, paintings, toquilla artworks, musical instruments and more. Visitors soon find that “bargaining” is a common here and an accepted practice.

In addition to the handicrafts fair, Otavalo boosts another attraction: Its animal market. Every Saturday, starting at 6:00 a.m., this exotic fair exhibits everything from chicks to llamas, as well as rabbits, guinea pigs, cows, sheep, goats, horses, and cats and dogs. It’s a scene that seems frozen in time. 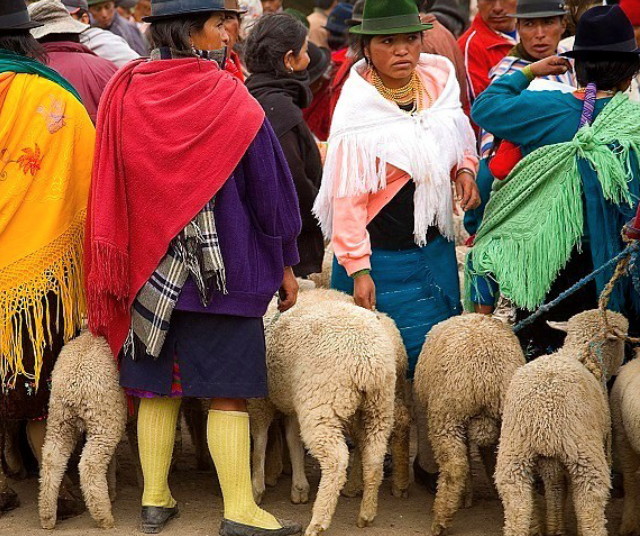 Walking through the city of Cotacachi is like walking through a great showcase. All kinds of leather goods — jackets, pants, belts, wallets, shoes, jackets, bags, and more — are seen in the windows of dozens of shops along the streets of this town of 40,000 inhabitants.

Although many of the models follow international fashion lines, Cotacachi’s own designs are also on show. Added to the styles, the prices are well below those in found in foreign cities and even large Ecuadorian cities. This combination of quality, style and value attract thousands of people to the town, especially on weekends, as they wander through Cotacachi’s narrow streets in search of the perfect garment or accessory. 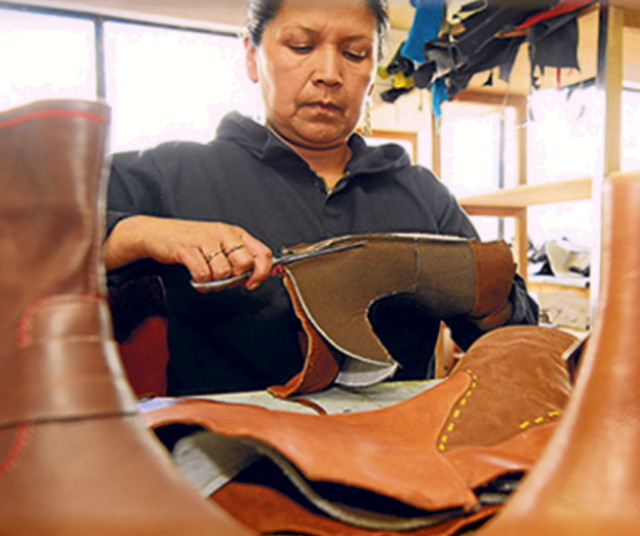 But Cotacachi is not just leather. Visitors are usually surprised by the ornateness of the town’s main church, where inside are six chapels, gold-leaf altars, and “Quito School” works of art on display. Another point of attraction is the Athens Lookout Pont, from where you can see the stunning lakes of the Cotacachi Ecological Reserve, which is the largest conservation area in Ecuador’s northwestern Andes. With lush forests, nature reserves, snowy landscapes are the extra elements you will find in Cotacachi, in addition to the country finest leatherworks.

Marvelous shapes emerge from walnut wood thanks to the skillful hands of artisans of San Antonio de Ibarra, a village situated in the middle of Ecuador’s Andean highlands. Walking through the quiet streets of this town means discovering the many houses that are craft workshops, whose precious wood pieces have made this place famous. Worked with the techniques of the “Quito School” and covered with gold leaf, these unique works stand out for their rich earthly colors and beauty.

Small and large wooden sculptures, altarpieces, and motifs of all kinds are carved in cedar, orange tree, walnut and laurel. In the center of the village, works created by men, women and even children are sold in each house. 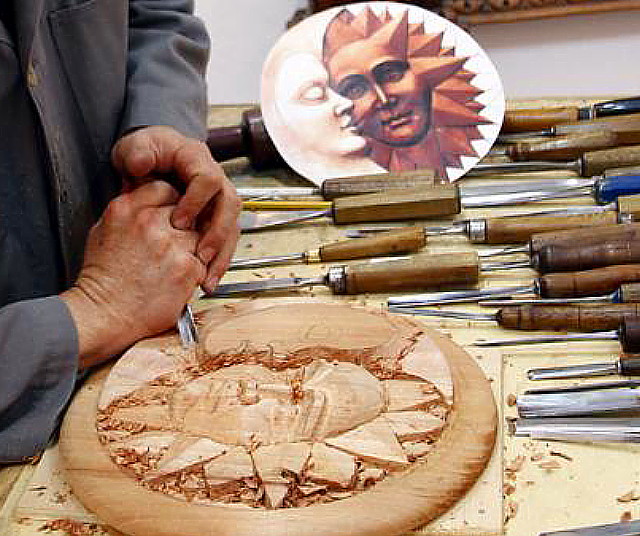 In Ecuador, many embroidered cloths with pre-Columbian designs have a seal that indicates their origin: The indigenous community of Zuleta, located to the southeast of the province of Imbabura. The tradition of skilled work using thread, thimbles and fabrics is old, but the craft found a space in the 1940s, in the hacienda of the Ecuadorian president Galo Plaza Lasso. The official’s wife created a workshop for women in the area where they could embroider and then market their beautiful garments, thus bringing in extra income for their households. 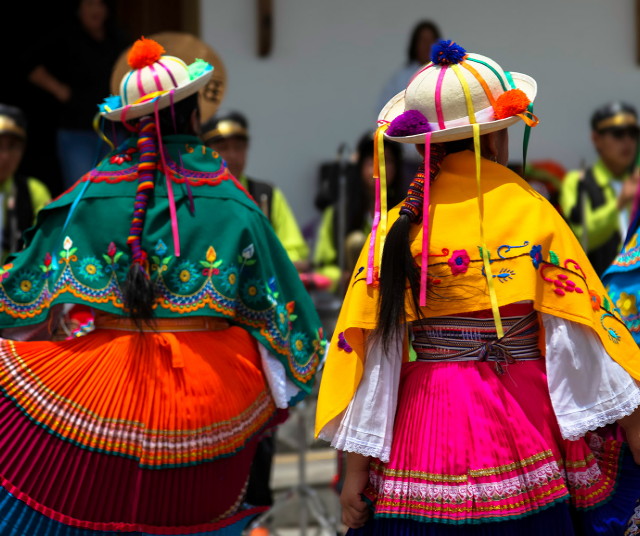 Dresses, blouses, tablecloths, rugs, towels, and other items, with fine finishes that reproduce details of the rural setting and the indigenous worldview are created by the skilled hands of more than 300 embroiderers. For the past 15 years, crafted garments have been displayed every other week on the premises of the hacienda at the Fair Zuleta Embroidery. Many public figures wear these highly original, embroidered attires, but what not many people know is that in a presidential visit to the Vatican, Pope Francis received two embroidered garments created by the skillful hands of Zuleta women.

This small colonial city whose Indian name means “big drum” and whose architecture and layout are the footprints of the Spaniards the past epoch. The village enjoys a mild climate and breathtaking scenery, as it’s located in the Andean foothills of the Imbabura Volcano. Its quiet pace of life has made many people choose it as a retirement destination.

On the ruins of an earthquake that destroyed the city in 1868 rose this village, today with a population of 21,000 inhabitants. In its reconstruction, a major role was played by the arrival of the railroad but also in the establishment of a textile factory. 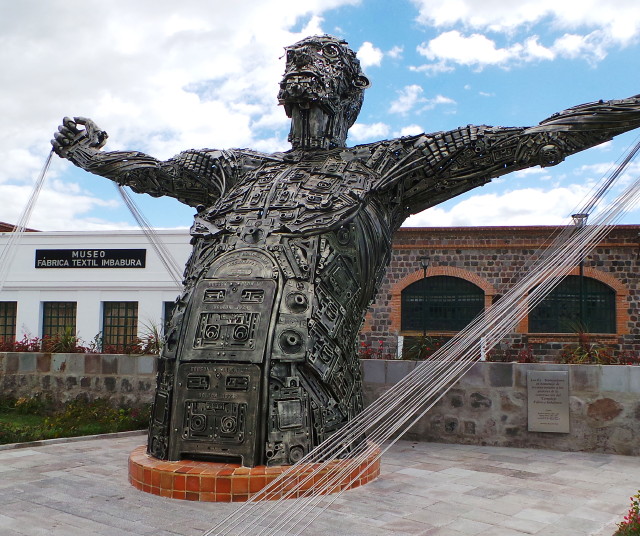 Having now ceased operations, the first textile factory remains as a historic edifice that preserves antiquated English and German machinery within its walls. Declared an “Ecuadorian Cultural Heritage Site,” the building today houses the city’s Textile Museum. To visit here is to learn of the origins of an activity that remains one of the main industries for this population. In fact, every year in this small town a textile fair is organized that attracts almost 150,000 visitors. For those who come to experience this pleasant village, we can almost assure you that you’ll not want to leave without at least one of the beautiful garments on display in the windows of almost every store in Atuntaqui’s quaint downtown center.